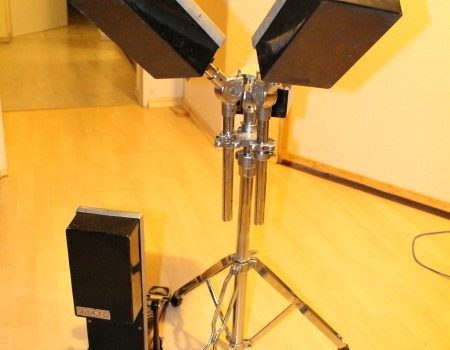 We were known as purists but all the same not averse to trying new technology when it suited and through early 1981 Seb spent some time working with Dave Simmons trying to put an electronic kit together to use with the band.

The main thinking at the time was to reduce the amount of gear on stage, having a smaller kit meant less obstructions, you’d be able to see the drummer performing instead of just a head and waving arms above the kit. We often hid amps and other gear behind backdrops and stage props over the years too. So working with Dave Simmons, Seb had an even smaller kit built, instead of the large hexagonal bass drum head and smaller snare and tom hexagonal pads, he had these smaller “lunch box” sized pads built.

The technology of the time though meant that the sound source or brain of the Simmons kit was an analogue drum synthesiser. This was before affordable digital memory chips would make drum sampling cost effective, the Linndrum was still a year or so away yet. Interestingly Seb also got himself a Linndrum after he left the band in 84, and did some session work with it. The Simmons was strictly analogue though back then and the sounds mimicked the real thing but didn’t quite cut it. The kits worked brilliantly within electronic music but sadly didn’t quite work out for us at that time. Such a shame it was a fantastic piece of kit.

After all of that work the kit got used just one time to mime on a TV show (Boom Boom… Out Go The Lights – my first ever TV, we performed Plan B alongside an amazing “alternative” comedy showcase. Including a send up of ourselves by Alexei’s Midnight Runners) and then one time in the studio, sadly just for a door slam effect. It was brilliant for that door slam though. DerThunk.